Our Safer Routes group organised a week's campaign to heighten awareness of keeping safe around the school...

Here is the press release that was written after the campaign: (See underneath for further information for our parents and carers)

Parents recently shared concerns over road safety around The Downley School following a steady increase in vehicular traffic in and around the school site, which has led to a number of near misses!

Based in the village of Downley, the school site is in a residential cul-de-sac and the site is also shared with Maplewood School and Sunshine Montessori Nursery.  As you would expect near a school, morning drop-offs and afternoon picks-ups are a very busy time involving vehicles coming on to the school site and in the neighbouring roads as well as pupils and parents/carers.

This increase in the volume of traffic, combined with cars parked on corners and speeding motorists, leads to poor visibility for all users around the school - particularly young children.

According to Think, part of the Department for Transport, around 1400 children aged 0-11 are killed or seriously injured on Britain’s roads every year – almost 27 children every week.

These shocking figures have galvanised the Safer Routes to School Group at The Downley School to spring into action and really focus on road safety, starting with a week-long campaign to raise awareness of the road hazards around the school and how the school community can really have a positive impact on everyone’s safety.

As a values-based school, pupils are familiar with values such as consideration, patience, respect, to name a few, and all of which are essential for any road users.

Chris Gentry, Chair of Governors at The Downley School who took part in the week’s activities believes, “The safety of our pupils is one of the school's top priorities and the Governors are fully behind the Safer Routes to School Group's work to improve the road safety in the areas in and around school."

Commenting on the road safety campaign, Police Community Supoort Officer C8841 Weaver said, “The Downley and Disraeli Neighbourhood Policing Team are fully behind the Safer Routes to School initiative that The Downley School have organised.   It is really important to raise awareness to parents/carers drivers about the issues that schools face during drop off and pick up times. Lots of children are walking around and are very vulnerable to being involved in an accident at these busy times. We are working alongside the Downley School and have held assemblies with both key stages to educate the children on the dangers of crossing busy roads and increase their knowledge of road safety. We were present throughout the week to support the Safer Routes to School Group and encourage drivers to park elsewhere rather than outside the school.”

Parents/carers received advice including alternative locations within the village as to where they are able to park and walk to school.

Children already participate in the Going for Gold scheme which encourages the benefits of walking to school and pupils earn recognition for doing so.  The school has also been awarded a Bronze Award for the Modeshift Stars initiative by demonstrating the different ways in which it educates and promotes road safety to the school community.

Sonia Workman, a parent volunteer of the Safer Routes to School Group noted, “The reason for the campaign is that our young people are important and it is up to our school community to keep them safe by raising awareness amongst both pupils and parents/carers.  Road safety is a key life skill.”

But as with everything, the proof really is in the pudding and after only a week, have behaviours to road safety changed?  Sonia goes on to say, “ We are really pleased by how the school community has responded and the significant improvement in the reduction of traffic around our school site withinin a few days.  However, road safety is an ongoing initiative, which the Safer Routes to School group will continue to promote passionately. We are well supported by our Parish Council who are assisting us to look at longer term solutions.”

Headteacher, Mrs Webb, would like to extend her thanks on behalf of the school community to the Safer Routes Group. They have worked extremely hard for the safety and wellbeing of all of our pupils 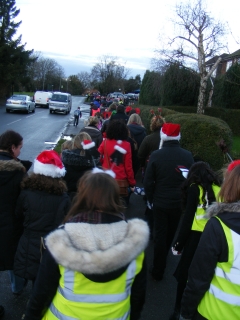 See our 'Santa' Walk To School event from the last day of term!